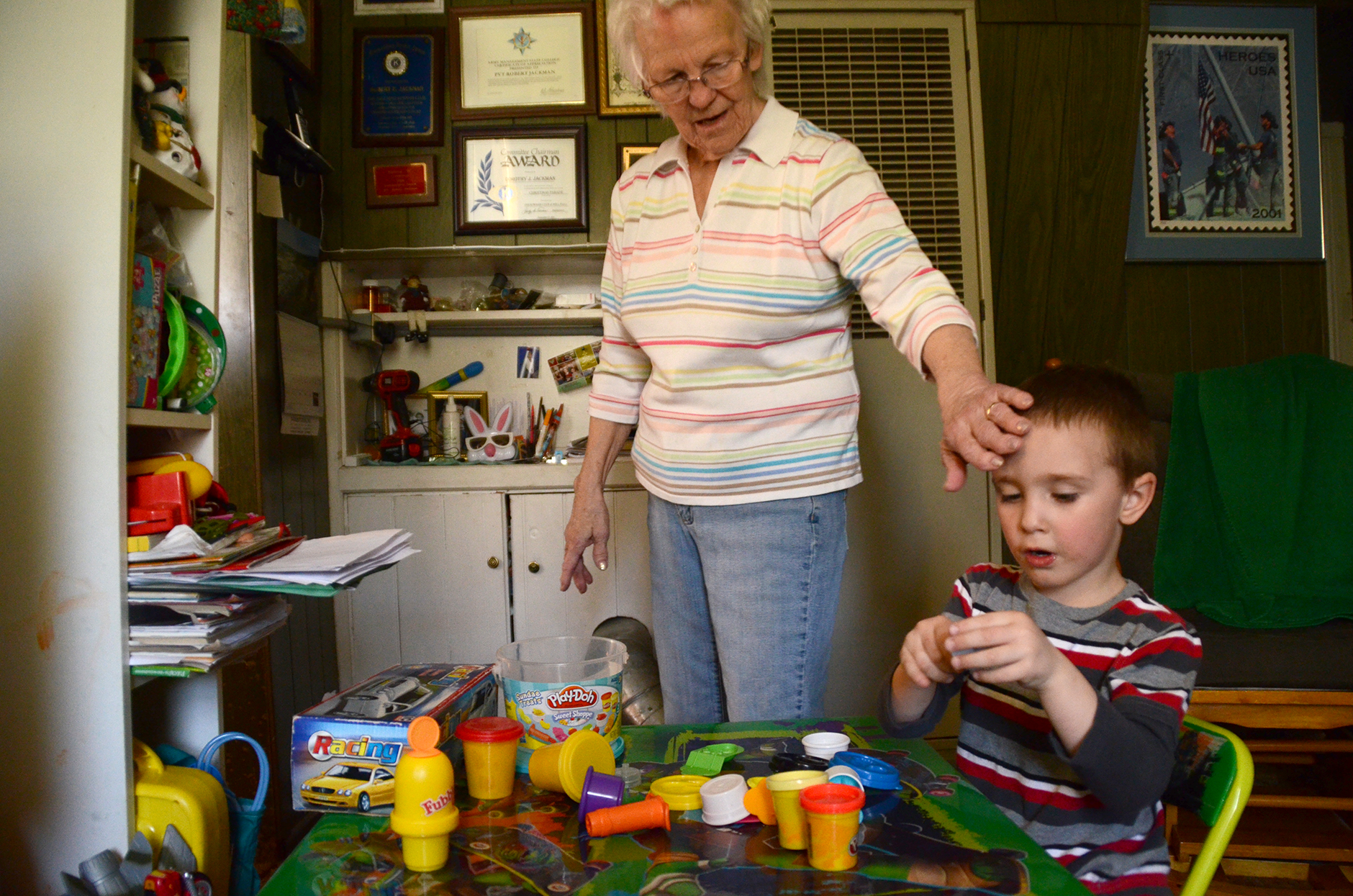 Dot “Meme” Jackman rubs her great-grandson’s head to check his temperature as he plays in their living room in Howard, PA. The day before, Trenton was in the emergency room for a high fever and other flu symptoms. Dot showed concern over the cost of the trip and the amount of time they spent driving to his appointment.

Bob and Dot Jackman never imagined raising a child together after marrying in their late 60s, but when their great-grandson was in need of care, they were ready to take on the role of parents one last time.

Dot Jackman rests a mug of hot tea between her wrinkled hands as she eases onto her couch to unwind for the day.  Her fuzzy white slippers barely set on the floor before she scoots across the room littered with toy cars to catch a mug of cocoa on the verge of spilling.

For Dot, an 81-year-old retiree, and her husband Bob, 83, a moment of uninterrupted relaxation is hard to come by these days.

Their expectation of leisurely days and nap-filled afternoons of retirement are now filled with potty training, bike rides and Play-doh, as they work together to raise their 3-year-old great-grandson Trenton. 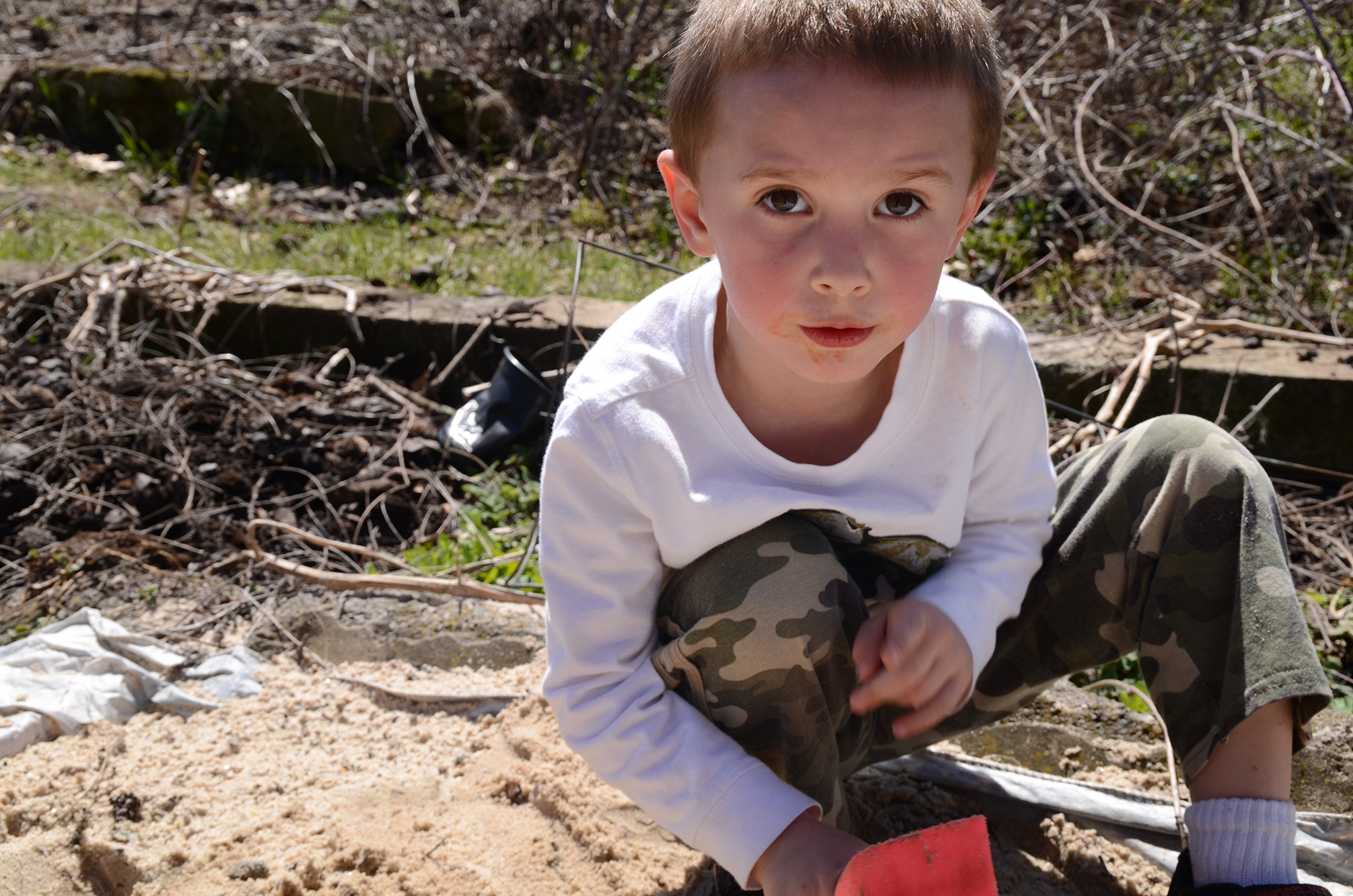 Trenton, 3, sits outside in his makeshift sandbox that Bob built for him in the backyard. Bob said they are preparing to refill the box and spend the weekend doing yardwork together, though Trenton’s idea of yardwork is burying his toy truck in the sand over and over again.

Bob and Dot never imagined raising a child together when they married in their late 60’s, but have gladly accepted the role as interim parents to the doe-eyed, energetic boy.

The couple began dating in 2001 when the only chair left in their church congregation left Dot sitting next to Bob. In 2002, their interest in war reenacting led them to marry on Dec. 7, dressed to the nines in civil war era garb. 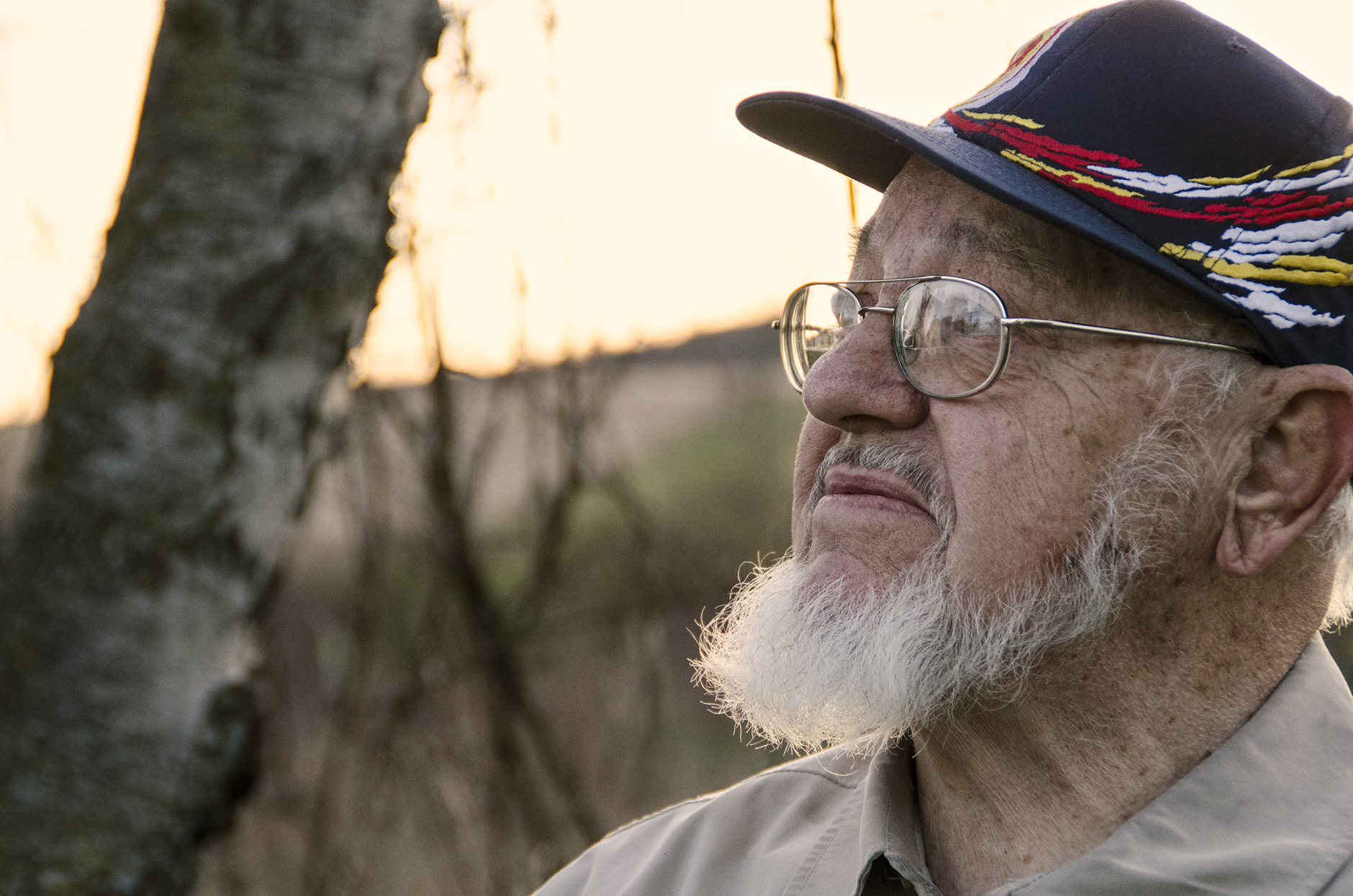 Bob watches Trenton catch air on their tire swing in their backyard on a late afternoon in April. The two can usually be found side-by-side playing, despite their 80-year age gap. Bob jokingly described Trenton’s abundance of energy, saying that Trenton never learned to walk but he just went from crawling to running.

Both had been previously married; Bob twice before and Dot once. Dot’s husband and Bob’s wife passed away not long before they met.

Through his other marriages, Bob had taken in four children of whom two he adopted. Trenton’s mother, Liz, is the daughter of Dot’s only child, Shawna, who lives in the area and was raised in the same house as Trenton is now. 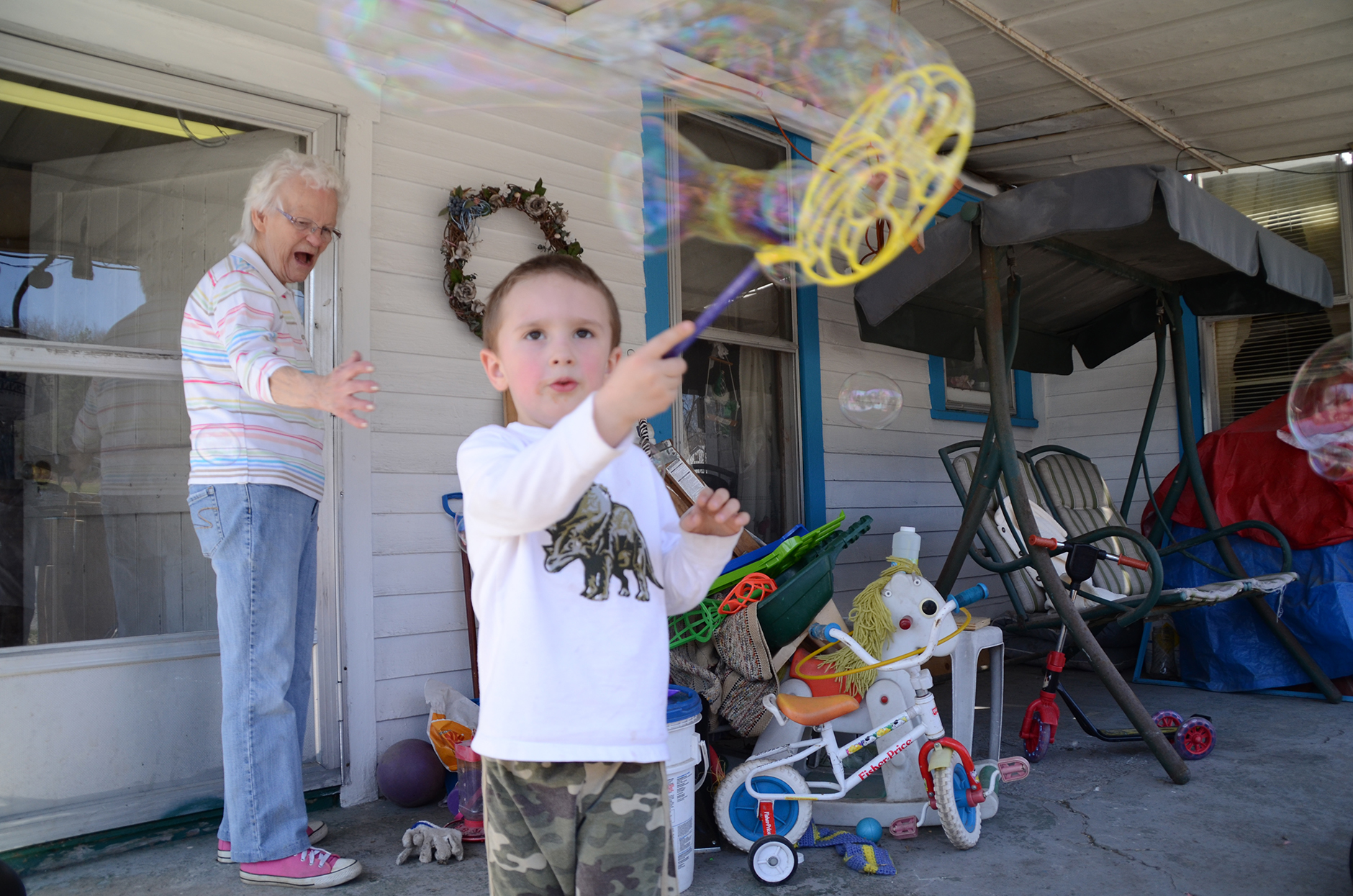 Dot scolds Trenton for dripping bubbles along the front porch and encourages him to play with his other toys. She enjoys sitting out front on sunny afternoons while Trenton rides his scooters and bike along the concrete slab. Some days, they walk to a local Amish farm to play and feed the animals.

“Meme” and “Pap,” as Trenton refers to Bob and Dot, received custody of Trenton last fall when his father was unable to care for him and his half-brother Damion, 5, after their mother Liz was sentenced to jail time.

Trenton’s father cared for the two boys for only a few days before Bob and Dot swooped in to bring them home when the food and diaper supply ran low. Not until their granddaughter was released from jail did they see his father again.

Through legal processes and the involvement of Children and Youth Services, Damion went to live with his biological father and Trenton with the Jackmans, though they visit together when possible.
Since her release a few months ago, Trenton visits with his mother weekly. He is unable to live with her because of her house arrest restrictions and a lack of income to support his needs.

“Sometimes he cried ‘why can’t I stay with Mommy longer?’,” Dot said about his visits to her while in police custody. “But now he knows that Mommy is available.”

The transition to parenting at the ripe age of 80 wasn’t completely foreign to them. They cared for Damion for a short period of time when he was younger, though this time around they have been caring for Trenton for over seven months. 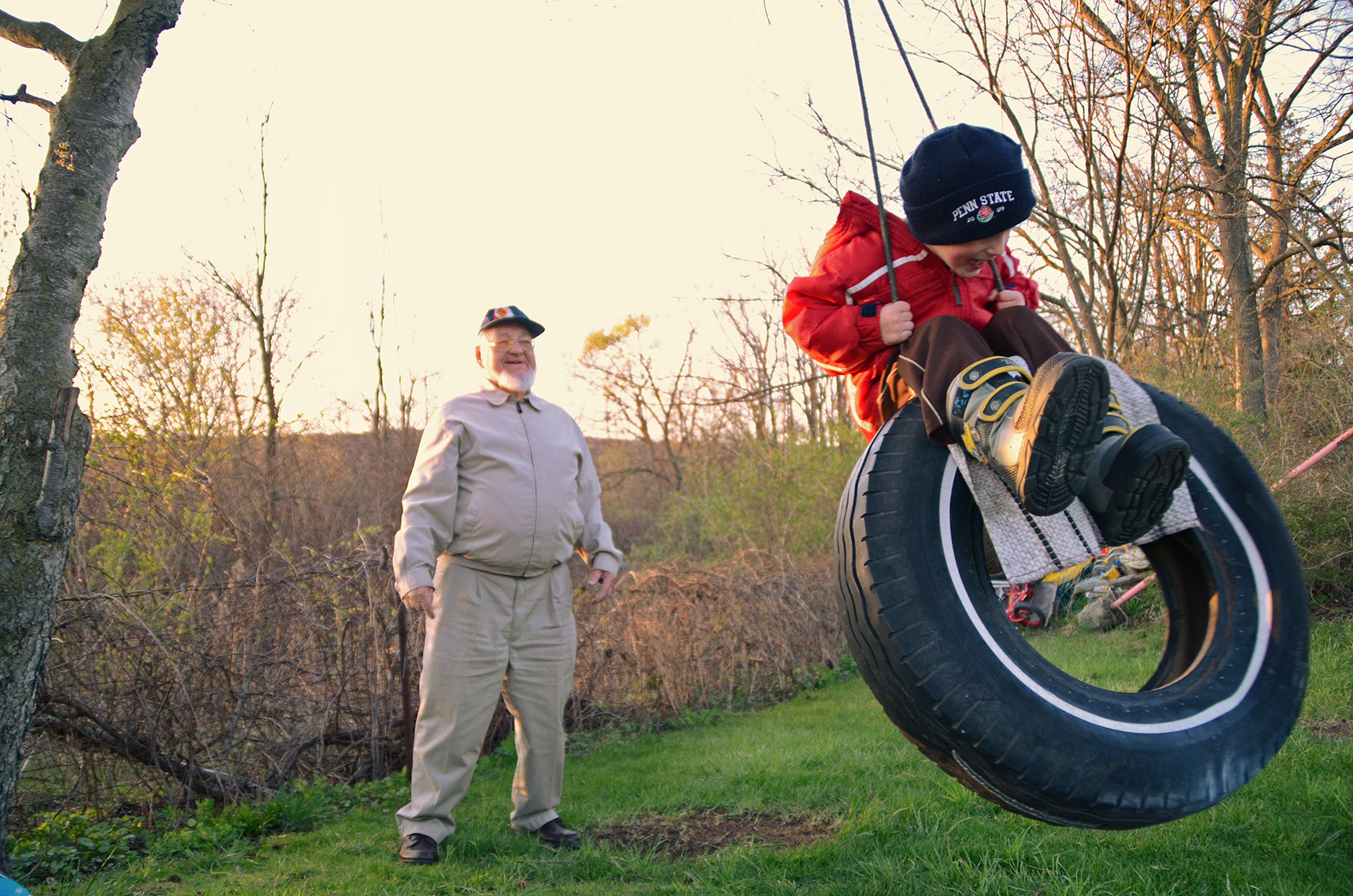 Bob pushes Trenton on the tire swing on a chilly afternoon. “Higher, spin me,” Trenton squeals through his soft giggles. Bob finals winds the boy up until he’s too dizzy to spin any longer and they retreat inside for some warmth.

“He keeps us busy. We have a lot more things to do,” Dot reiterates, listing the surplus of laundry Trenton creates, as well cleaning up toys and bringing him along to their social events at church. “The house doesn’t always look nice,” she added with a laugh.

There’s no mistaking that a child has taken over their modest-sized, one-bedroom home along the main drag of Howard, a rural borough on the outskirts of Centre County.

Their living room is cluttered with toys and they now share their small room with Trenton and his red bed positioned near the doorway. His green night light splashes against the wall above his bed. The night before, Trenton opted for a spot next to Dot, leaving Bob to sleep on the couch. 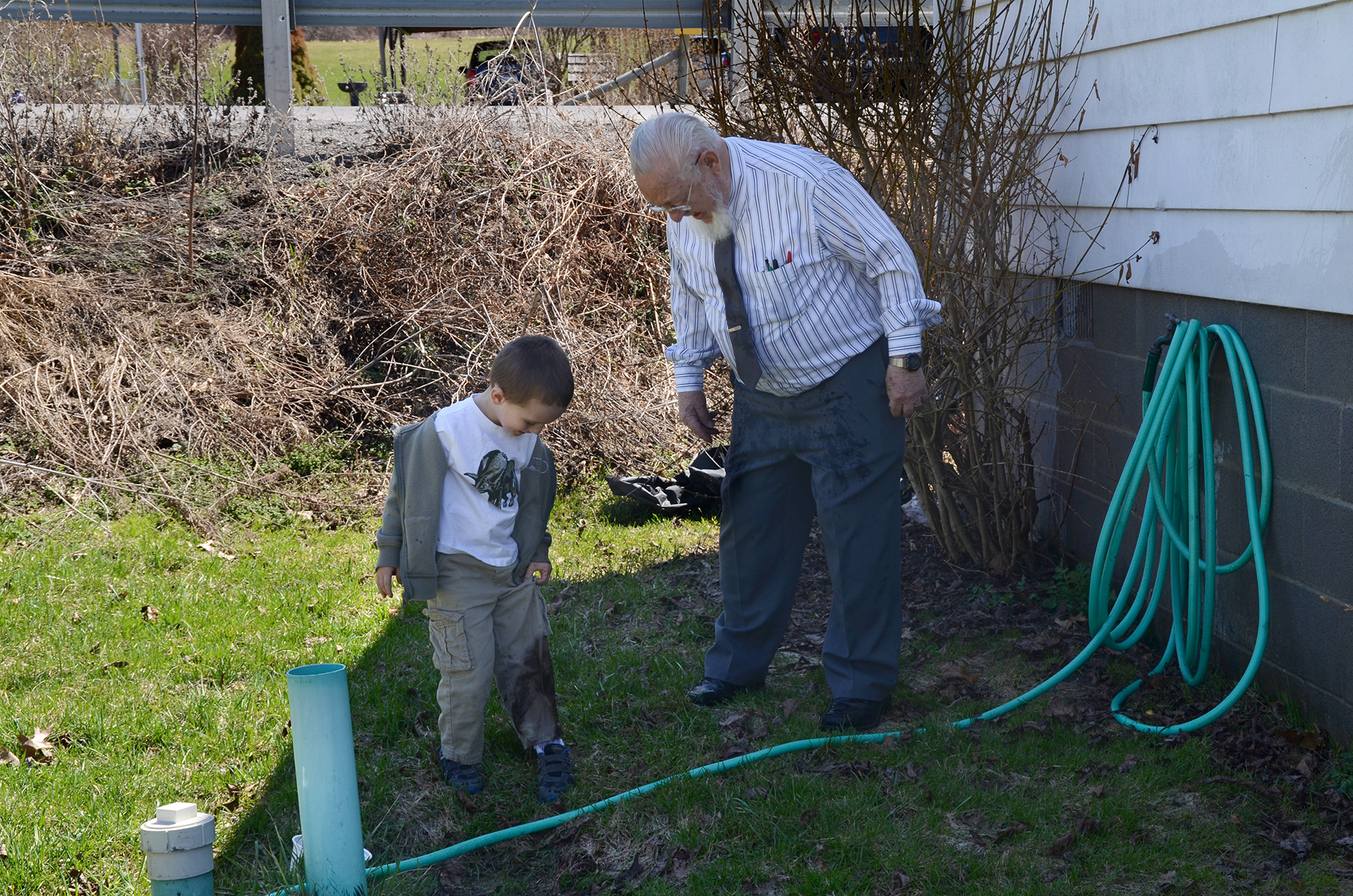 Trenton’s idea of “watering the grass” turns into a water war between him and Pap Jackman as he runs for the hose in Trenton’s hand. Bob’s church clothes are soaked from Trenton splashing him with the water. Not two seconds later, Trenton slides through his self-made puddle. He changed his outfit three times that day.

Piles of sand toys, bikes, scooters and balls are scattered along the front porch, just steps from the road. On any given afternoon, Trenton can be found shooting basketball with his makeshift hoop or digging in the mud alongside the house for as long as the sunshine allows.
When it doesn’t, he drags his bicycle inside for some indoor riding.
Not many children live in a close radius, so Dot and Bob have become Trenton’s entertainers and pals, taking him on trips to the Amish farm down the road to feed the goats and tagging along for rides on his new bike, an Easter gift from the pair. 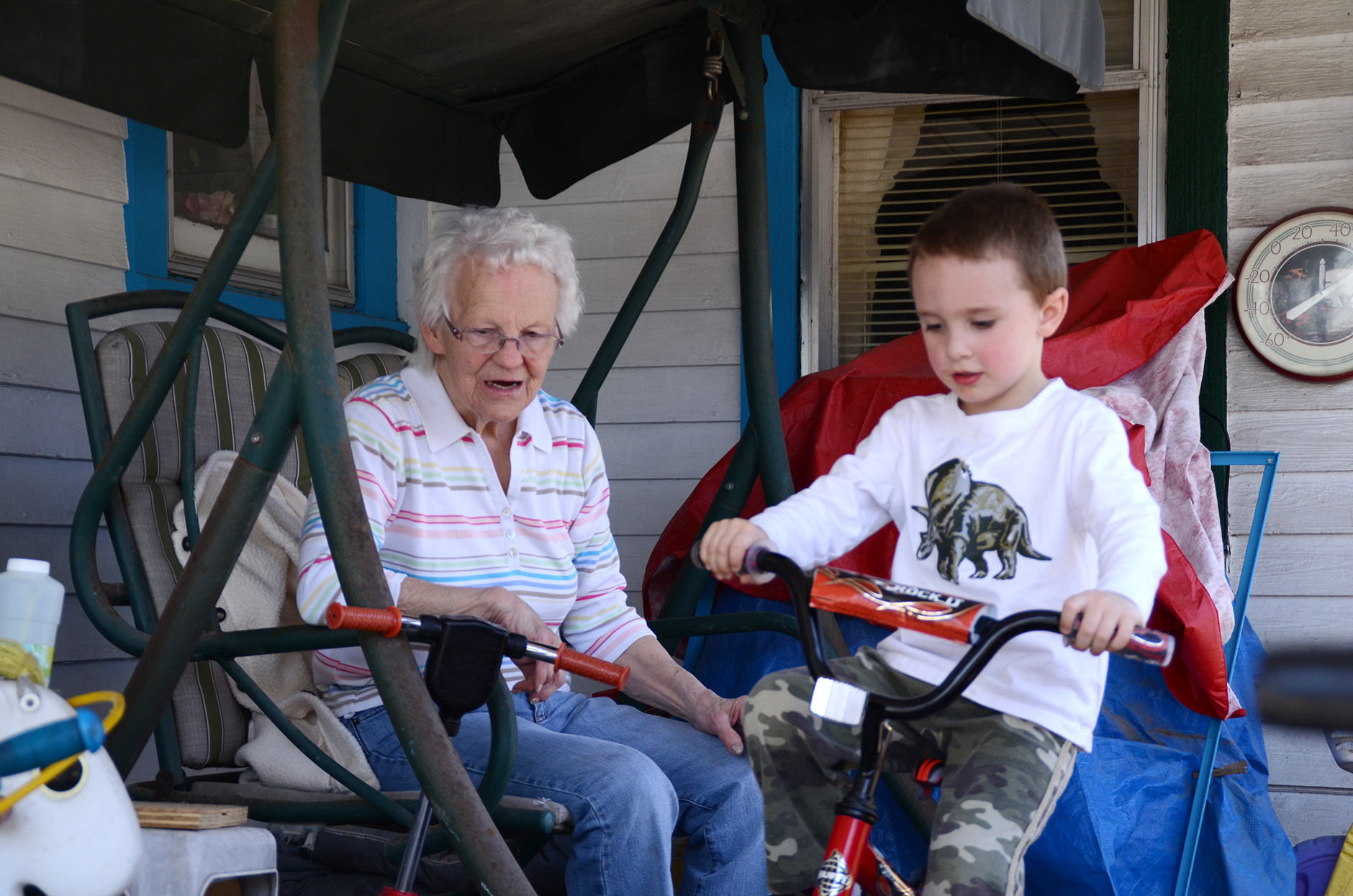 Dot tiredly watches Trenton ride his Easter present along the porch after a day full of church and yard work. She said he easily tires her out, though she enjoys spending her days gardening and playing outside with him the most.

They have also encouraged his involvement in their local church, the United Methodist Church in Lamar. There, they hope to socialize him with other kids and get him out of the house, if even just for Sunday school, she said.
Trenton also participates in STEP, a youth program in Lock Haven, focused on providing kids with early education. His teacher visits the house every Tuesday morning to practice numbers and play ball, Dot said. 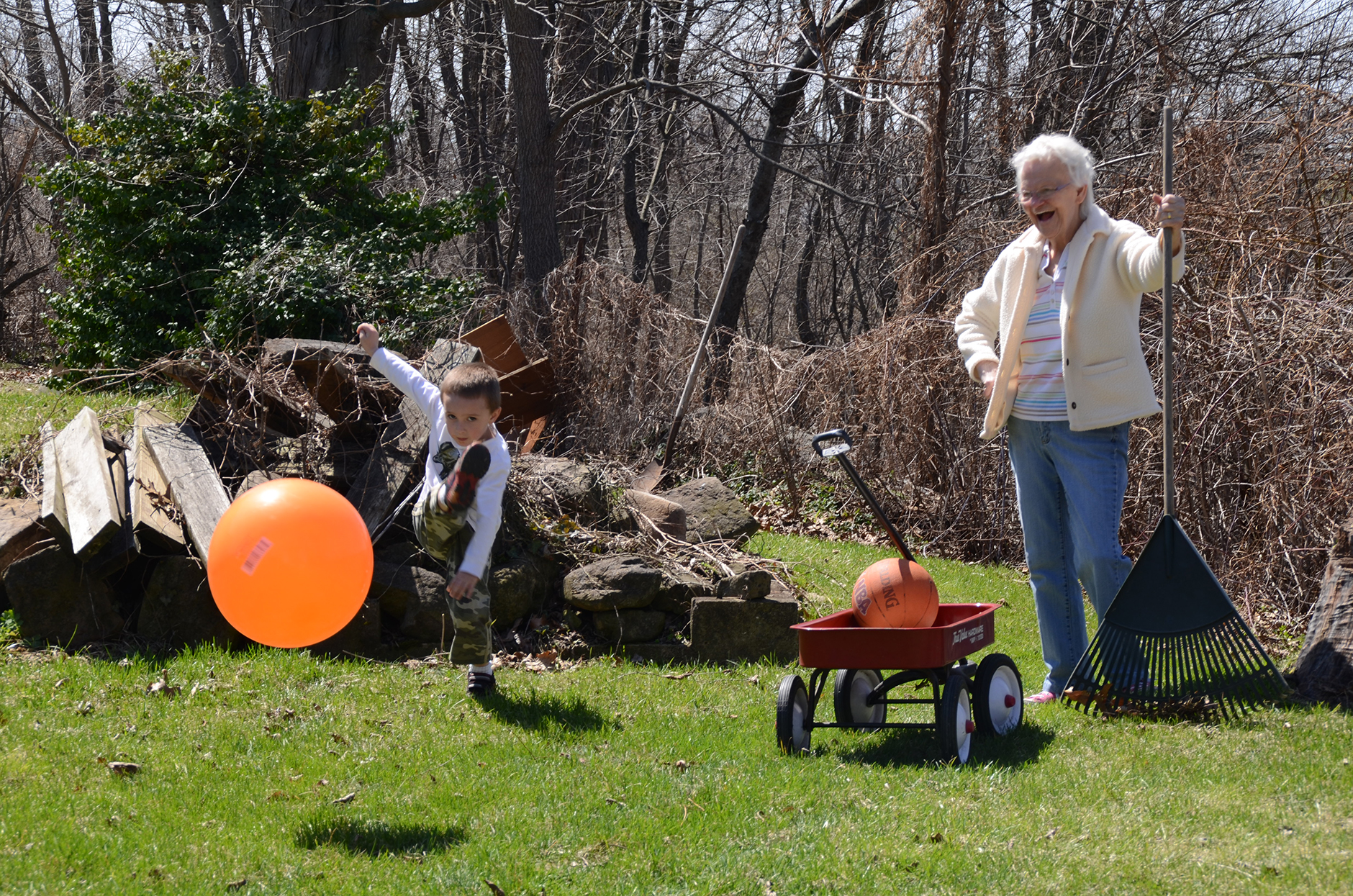 Trenton kicks the ball to Bob from across the lawn as Dot watches in delight. The two 80-year-olds do a remarkable job of keeping up with their young counterpart in games of kickball and baseball.

Dot drives Trenton to a class with other children three times a month and hopes he will continue throughout the summer while he lives with them. However, she is worrisome about his schooling plans for the fall, she said.
“He received a certificate for attending all of his classes,” Dot proudly said of Trenton’s attendance in his STEP program. “I hope [he is able to return to his mother] because of school transportation.”
The plan is that Trenton will attend school this fall, but his mother needs to find a home suitable and big enough for the boys to return to. If Trenton is unable to live with her, Dot and Bob will be responsible for transporting him to and from school because their home is out of the district, Dot said.
Driving him to and from Lock Haven on a daily basis will be costly, she said.
The couple currently receives Social Security benefits that allow them to provide for their household and taking on a young child is financially difficult, Bob said.
“We do receive WIC [Women Infant Children supplemental food program] and a small allowance from Centre County for food,” Dot said, adding that she provides him with toys from local yard sales and makes sure he is always well-dressed and fed. 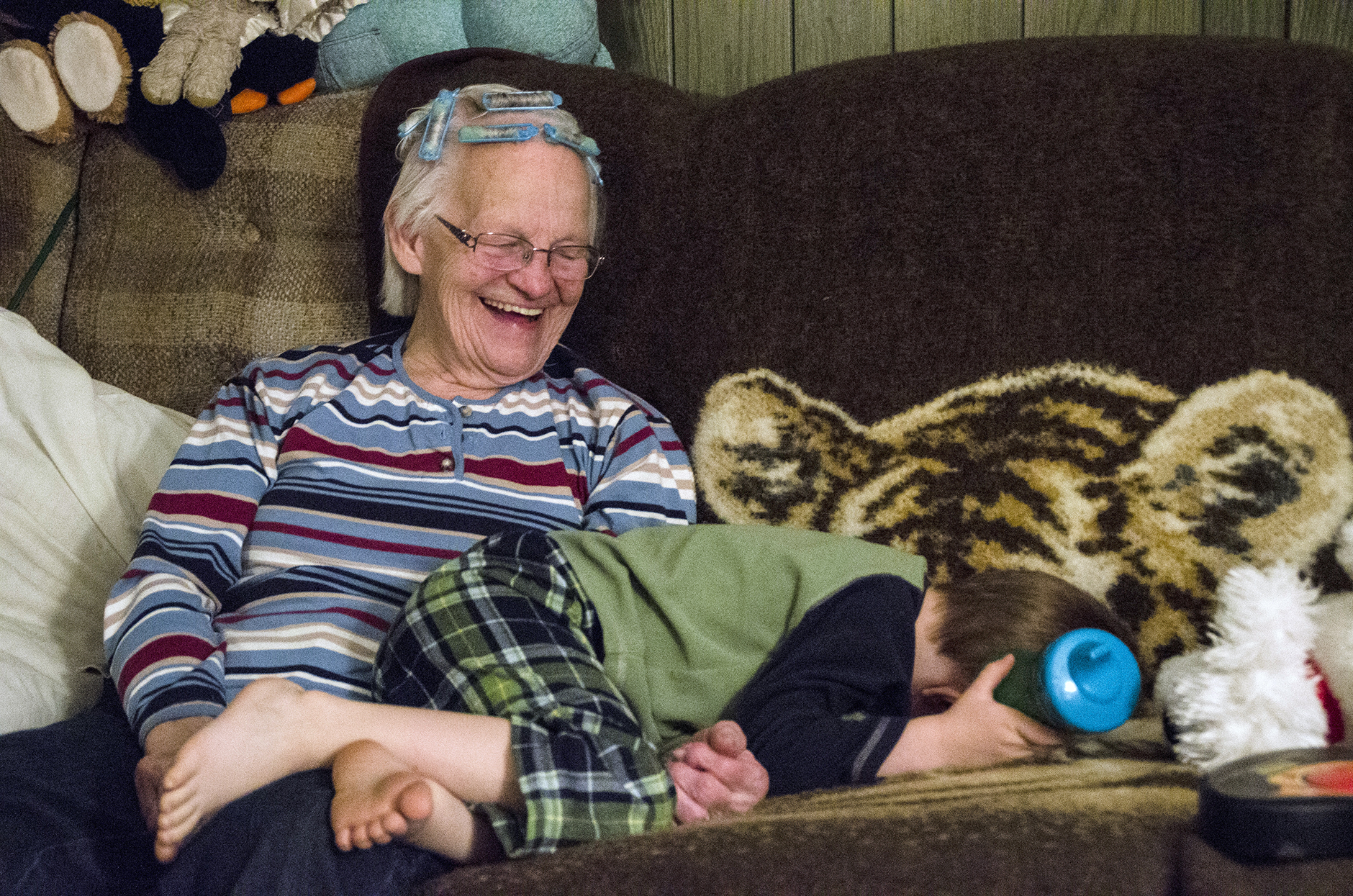 Dot smiles and comforts Trenton as his bedtime approaches and his becomes increasingly tired waiting for his nighttime snack. Shortly after, Dot brings Trenton one of his favorite treats, a ham and cheese Lunchable that she picked up from town early that day.

Dot noted that raising a boy is much different than girls – she comes from a line of females and raised a daughter, Trenton’s grandmother.
“They’re not as fussy over whether the shoes match the clothes,” she said. “They just need a shirt and pants.”
She has also learned the differences in disciplining boys from girls, though Bob claims he is the disciplinarian in the house. 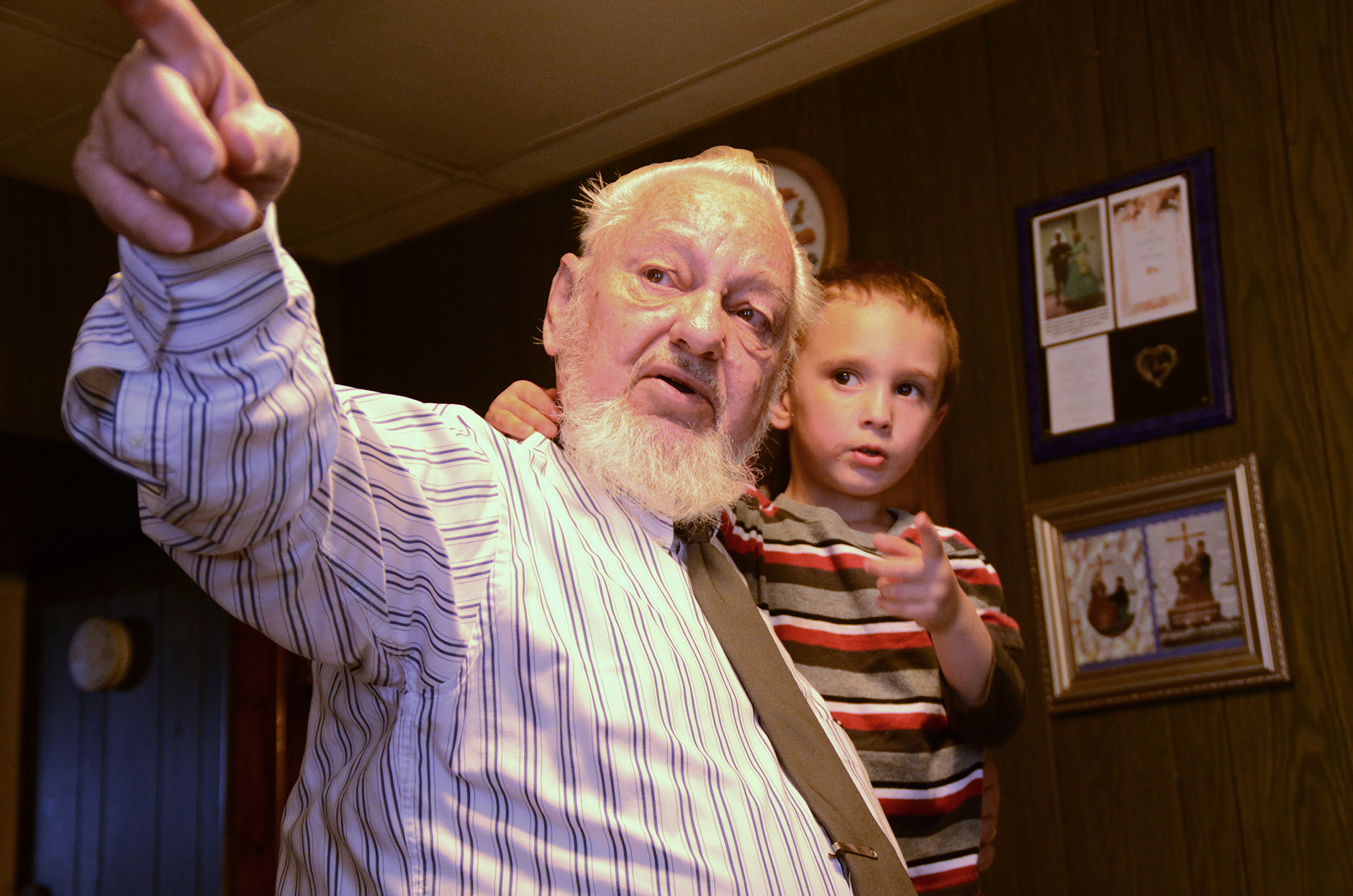 Bob and Trenton point out the Amish buggy rattling down the main drag of Howard outside of their house.

“Boys bang things and throw things and get angry,” she said. “But he’s got a really nice personality and it’s easy to change [his mood] from sad to happy.”

Trenton, like many kids his age, misbehaves to gain the attention of others. Many conversations between the adults are interrupted with his yelling for them to watch what he is doing or to help him with a game or toy. A tantrum usually follows even the subtlest of scoldings from Bob or Dot, but he quickly retreats to his hideout behind their loveseat – out of sight and piled high with blankets.

There’s no denying the couple adores the boy, even at these moments. 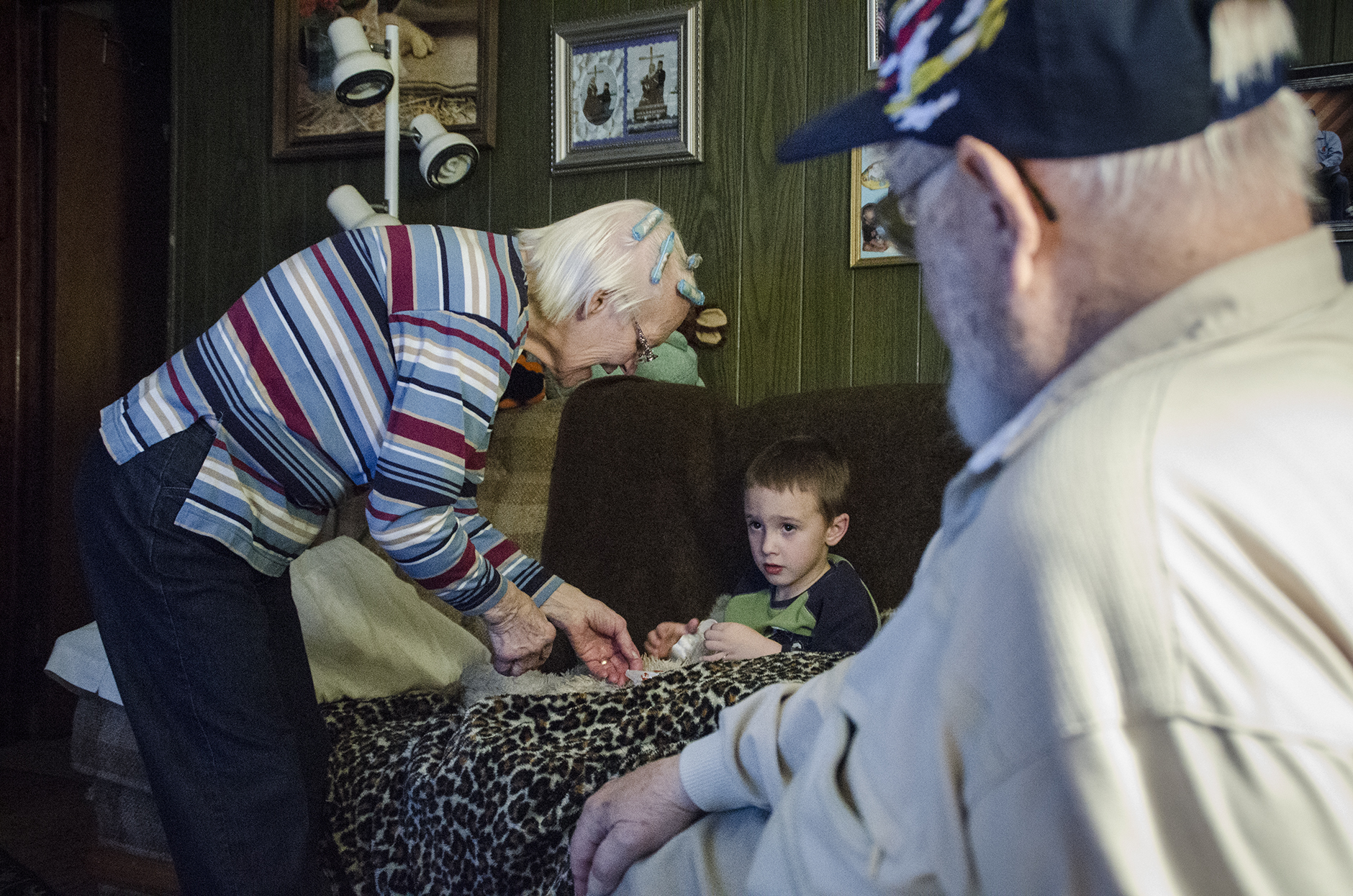 Dot reaches over to open the Lunchable package while Trenton is intently focused on the opening credits to Spongebob Squarepants, his favorite show and pre-bedtime ritual.

Dot spoils him with plenty of affection and attention. When he sits by her side, she pets his head and talks to him in her doting, grandmotherly tone. They regularly bake with each other and she closely watches him while they play outside.

Bob takes the role of his game pal and teacher. He corrects his “she’s” and “hers” and turns most tasks into games, like showing Trenton how to capture all the lost treasures behind the fridge with a long-armed grabber, a “game” that lasted well over thirty minutes. 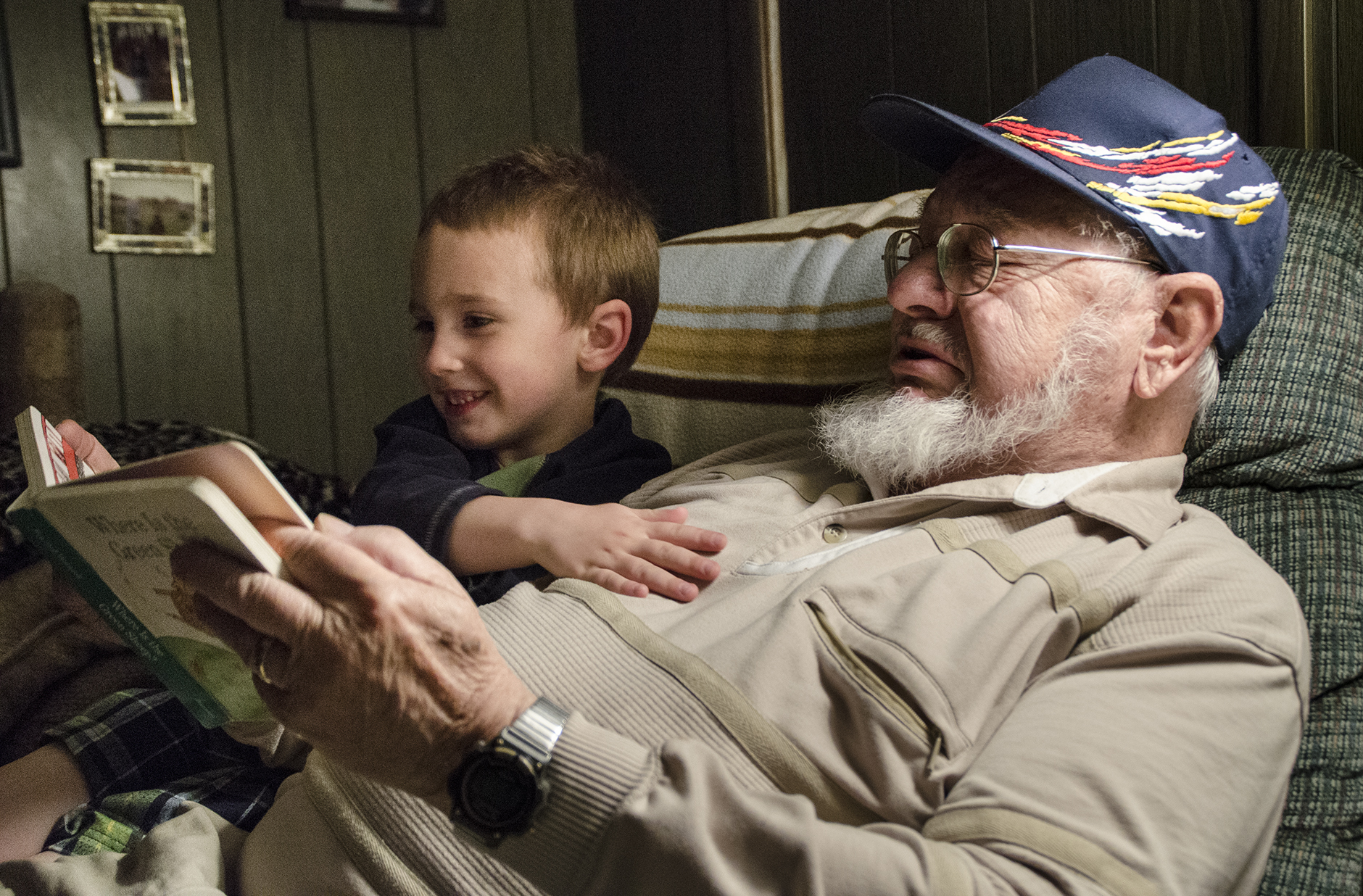 Giggles and shrieks can be heard from the living room while Bob reads Trenton a bedtime story. He exaggerates the voices of sheep in one of Trenton’s books piled along the floor.

Their dynamic is fascinating – an animated young boy full of energy and a pair of white-haired 80-year-olds following his lead.

Bob and Dot share an obvious, mutual sadness for the day Trenton will permanently return to his mom’s care.

“He runs us ragged, but when he’s able to go to his mother’s we’re sure going to miss him,” Bob said.

“And then, were gonna get some rest,” Bob chuckled. 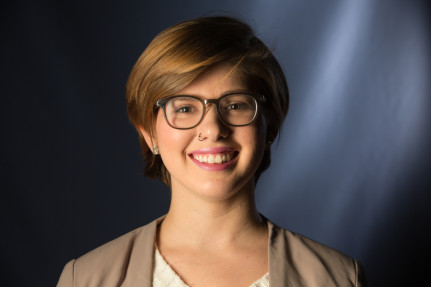 Carley Mossbrook is a soon-to-be senior at Pennsylvania State University majoring in Print Journalism with a minor in Anthropology. Her hobbies include cooking Asian cuisine, photojournalism and spending lazy afternoon with a copy of The New Yorker and her dog, Wyn.