Lisa Bednarchik retired to take care of her parents.  Her mother, Elaine Austin-Shoemaker, suffers from dementia and her father, Stanley Person, has Huntingdon’s disease. She is also deeply involved in caring for Cindy Kane, a woman she met through their church.  Cindy has Alzheimer’s and Lisa has stepped in to help with finances, medication and scheduling over the past few months. 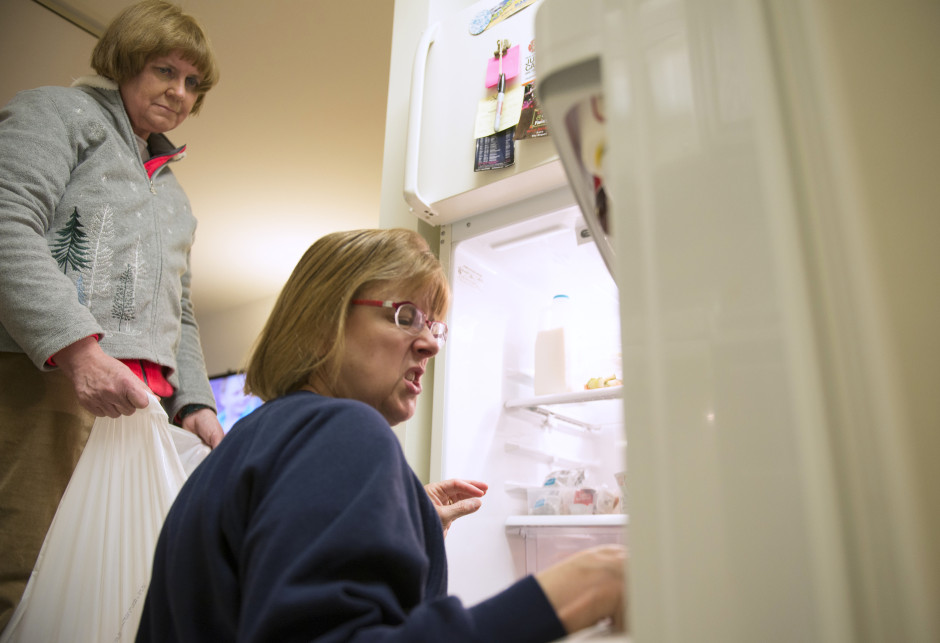 On March 31, 2015, Lisa cleans Cindy’s refrigerator to get rid of spoiled food that has been forgotten. Juniper, Cindy’s retirement community, provides meals for her, which become leftovers and many times are left to spoil. 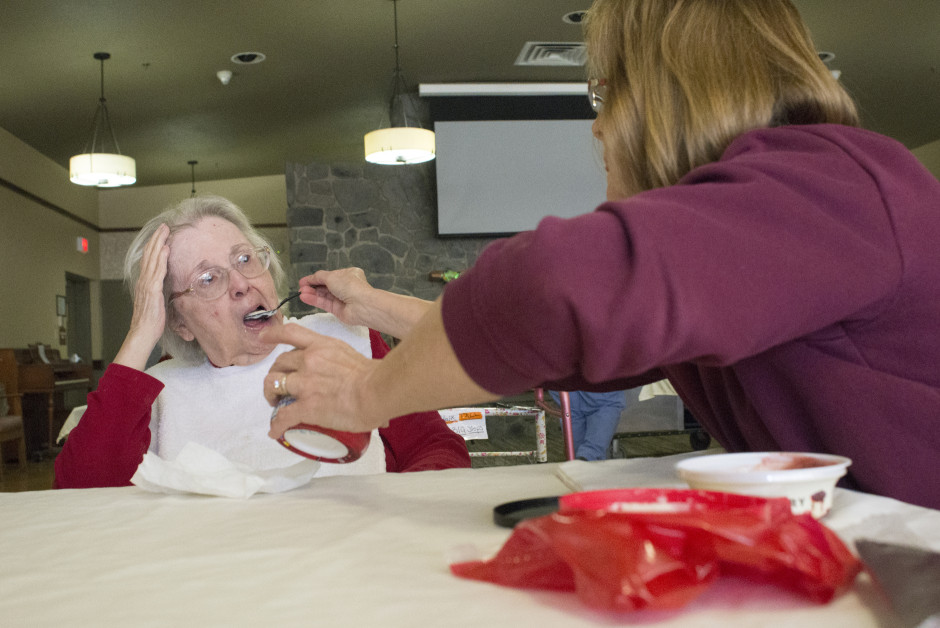 Lisa feeds her mother during the lunch hour at Hearthside on March 18, 2015. Elaine is unable to eat solid food so Lisa brings soups to supplement her other meals. 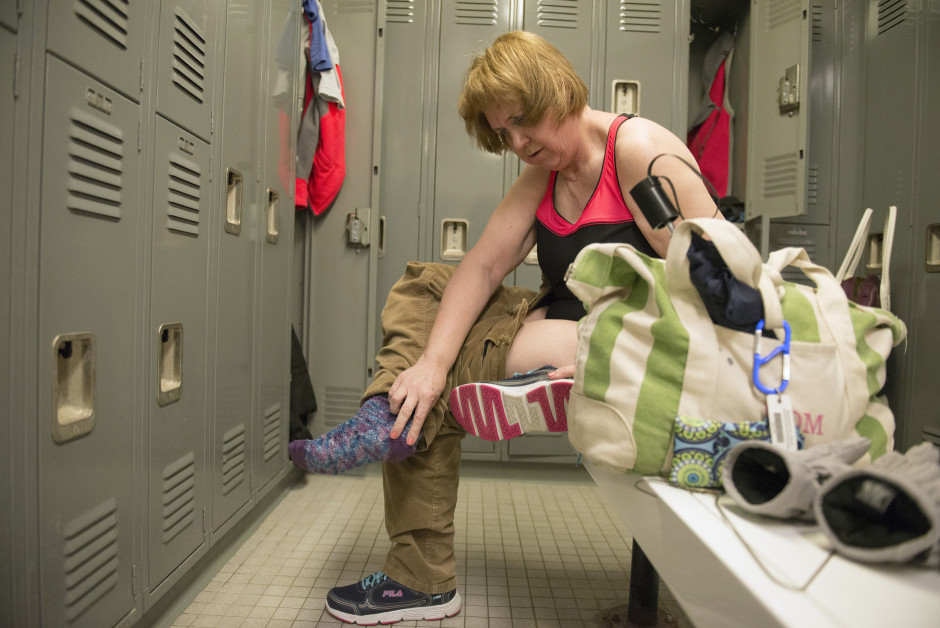 Cindy undresses before swim class on April 1, 2015 at the YMCA in State College. Often in a rush, it’s difficult for Cindy to keep things organized. 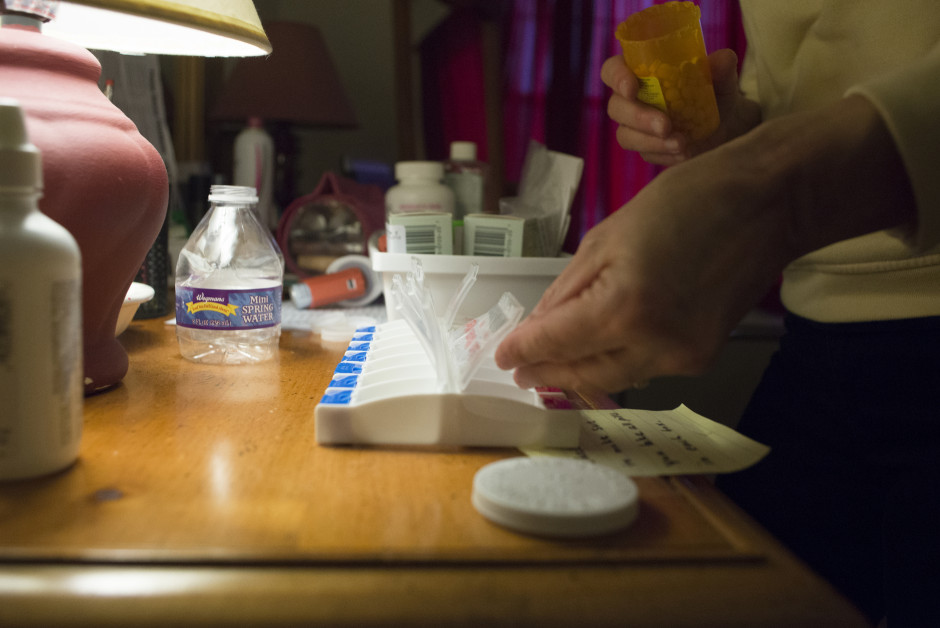 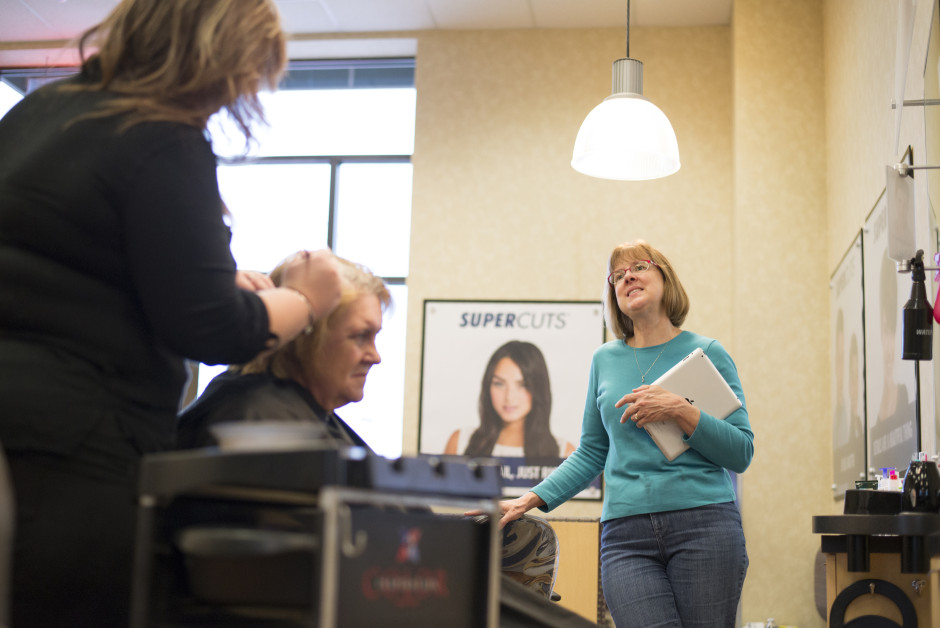 Lisa talks with Cindy’s hairdresser on March 17, 2015. Lisa accompanies Cindy to appointments to help with payment and transportation.

Every Tuesday morning Lisa goes over to Cindy’s apartment to check on her, refill her pill organizer, clean her refrigerator and tidy her room.  Lisa keeps everything in order, from bus passes to calendar scheduling.  Cindy relies on Lisa’s help to get through each week. 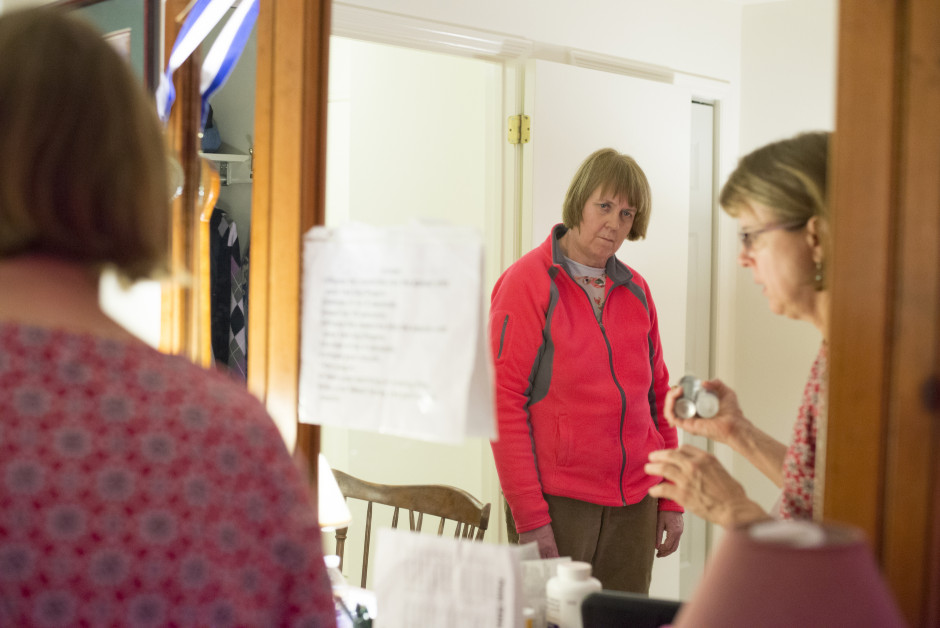 Lisa, right, explains to Cindy how important it is for her to take her medicine every day. Recently, Cindy has been missing a few days and Lisa is thinking about making daily calls to help her remember. 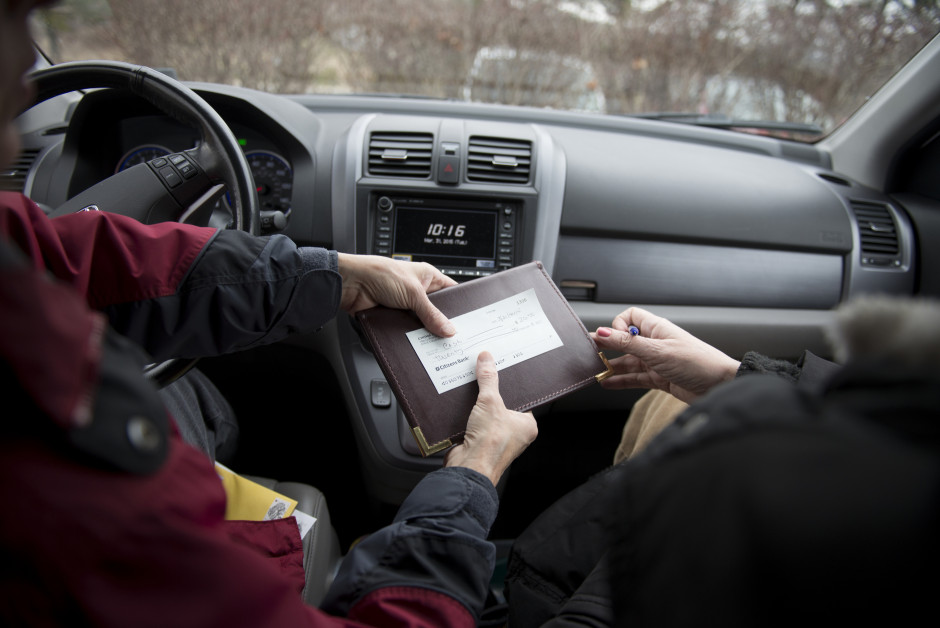 Lisa, left, hands Cindy a check to be signed on March 31, 2015. Lisa handles all of Cindy’s banking and financial matters. 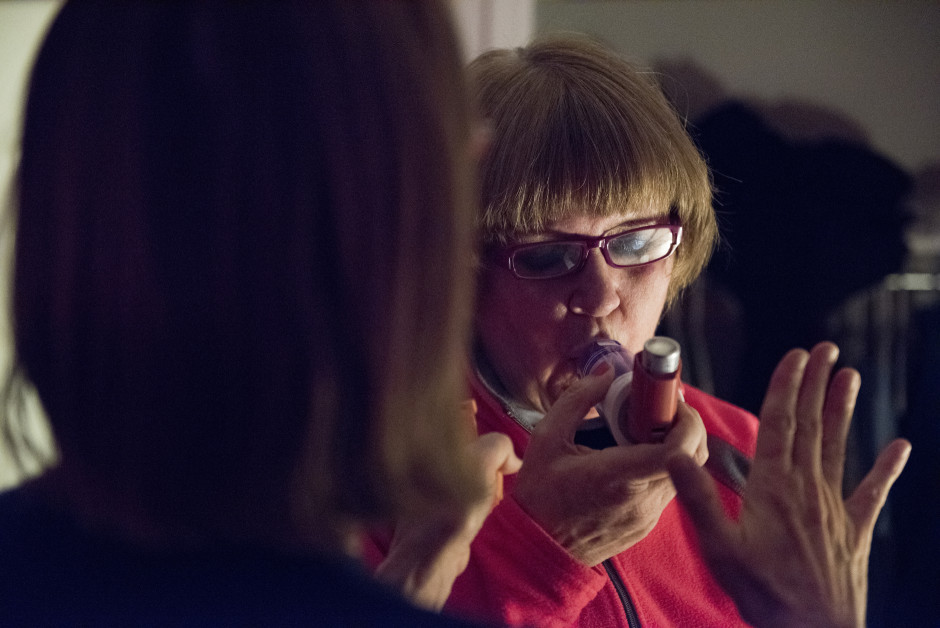 Cindy takes a breath with her inhaler while Lisa coaches her through the complicated process. Cindy often forgets to take her medicine. Lisa leaves calendar notes and reminders to help Cindy while Lisa is not there.

Before retiring, Lisa was a social worker.  She worked with adoption and foster children throughout the majority of her adulthood. She has always desired to help others and doesn’t see that changing in the future. 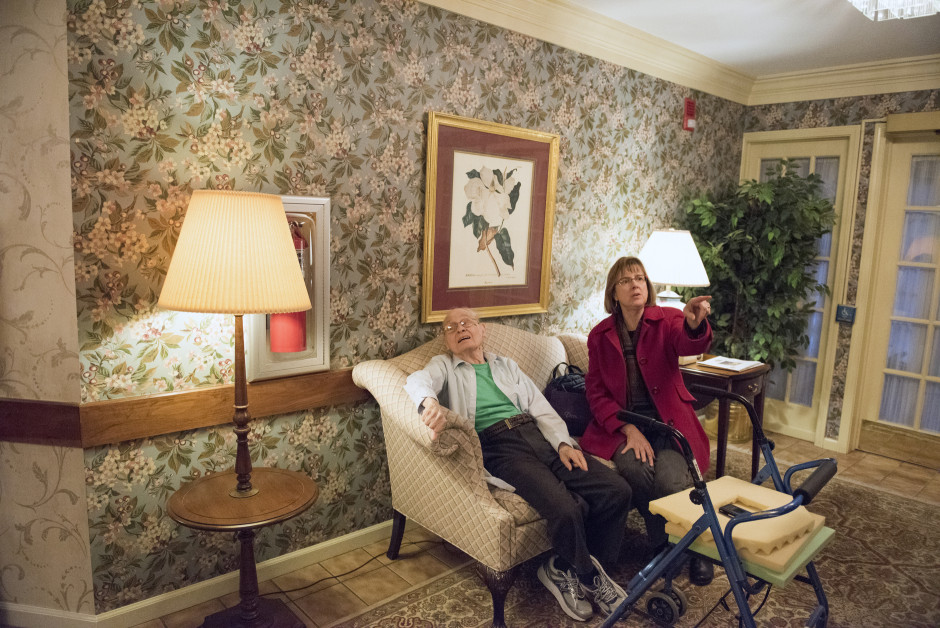 Lisa talks with her dad, Stanley, in the entry way of Juniper on February 6, 2015. Stanley enjoys creating art and is being featured at Juniper in their art show. 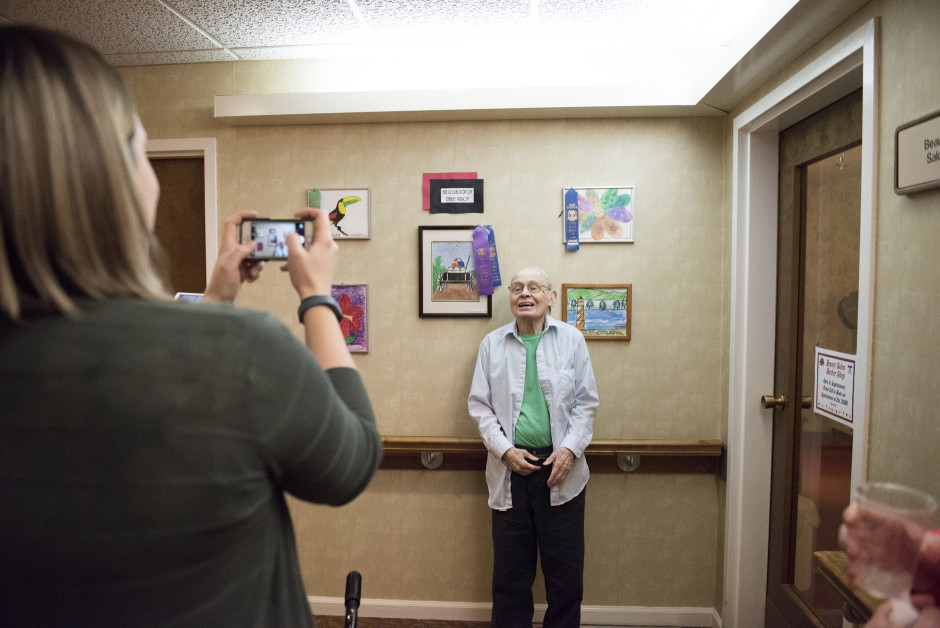 Stanley poses in front of his artwork at Juniper. Stanley has other residents draw pictures for him and then he uses watercolor to bring it to life. 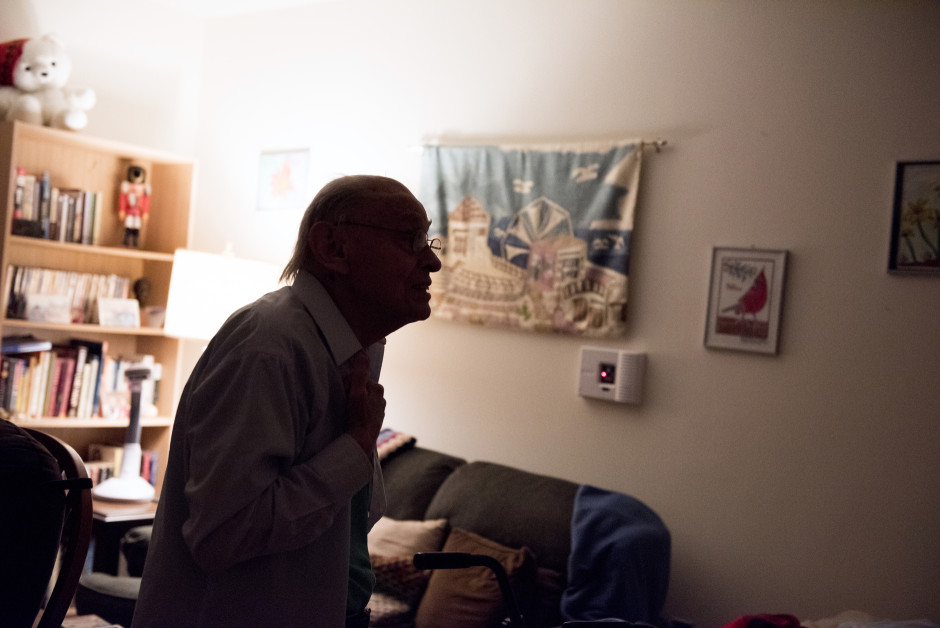 Stanley gets ready for bed in his apartment on February 6, 2015.  After an eventful evening at the art show he says goodnight to his wife and guests before going to bed. 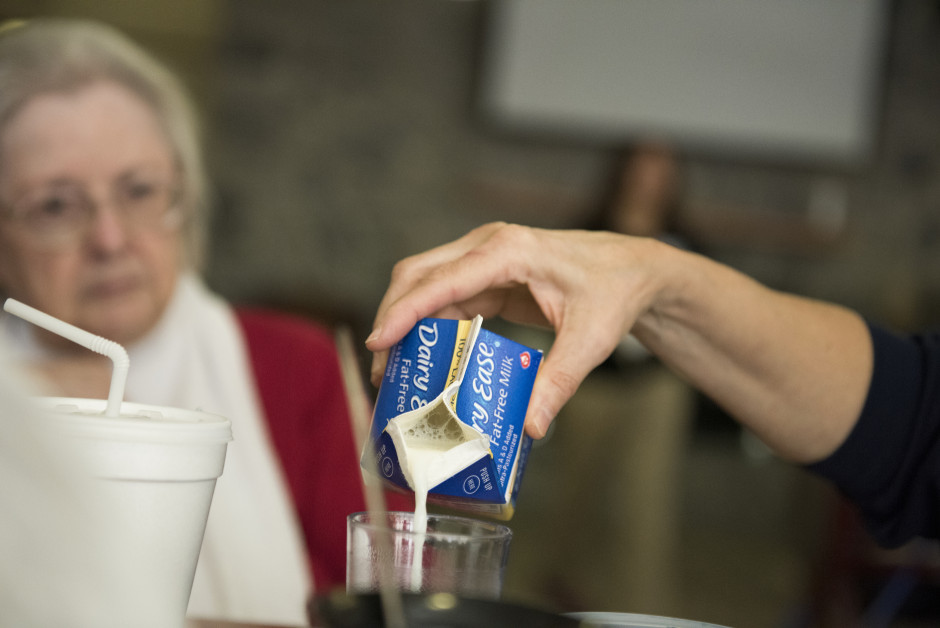 Lisa pours milk for her mom, Elaine, at Hearthside on February 4, 2015. 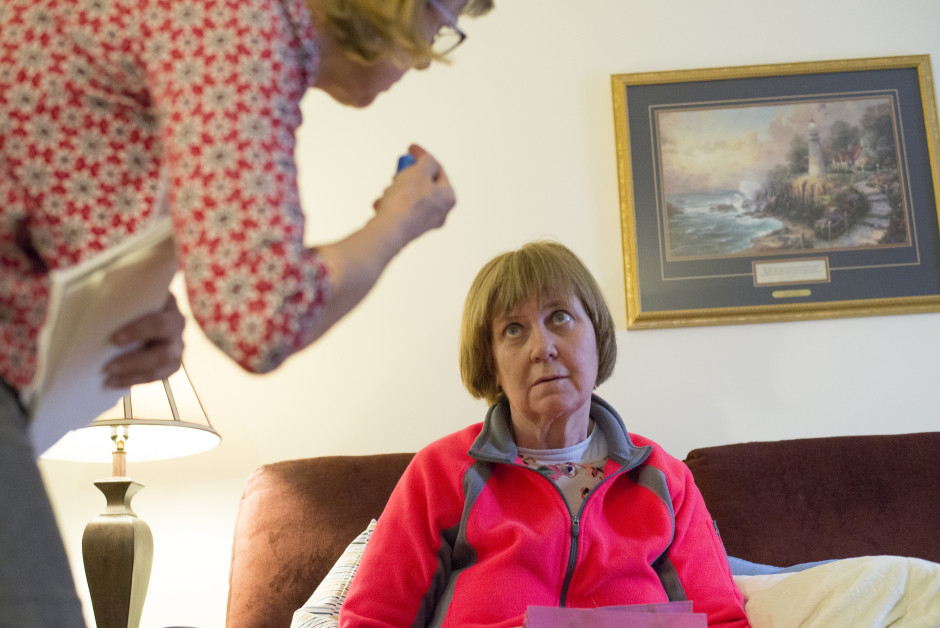 Cindy  looks up at Lisa who is explaining how Cindy should keep things organized in her apartment. Every week Lisa cleans and reorganizes to help the cleaning staff at Juniper. 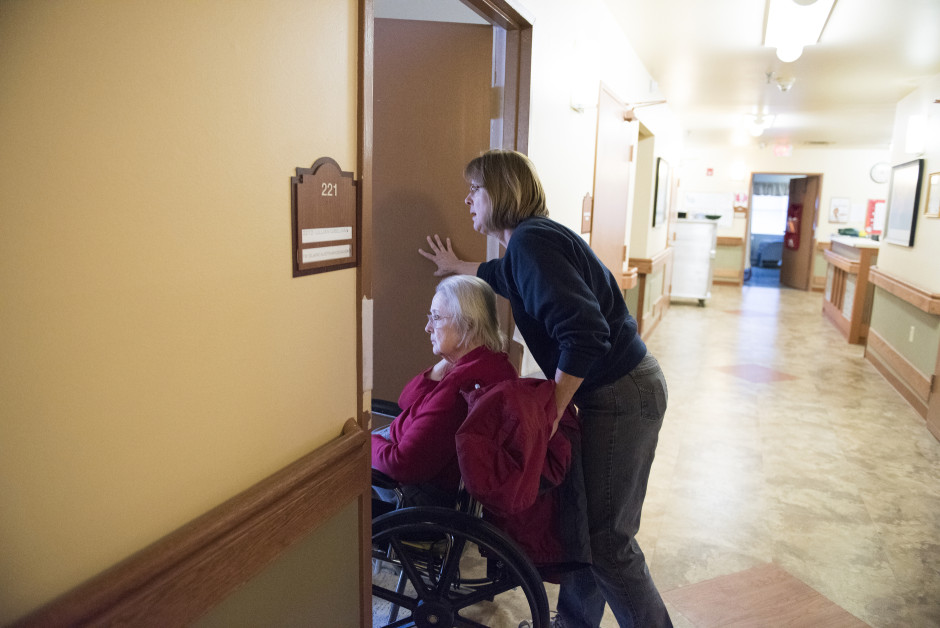 Lisa pushes her mom, Elaine, into her room at Hearthside on February 4, 2015. Elaine’s side of the room was being renovated and they weren’t sure where she was going to sit. 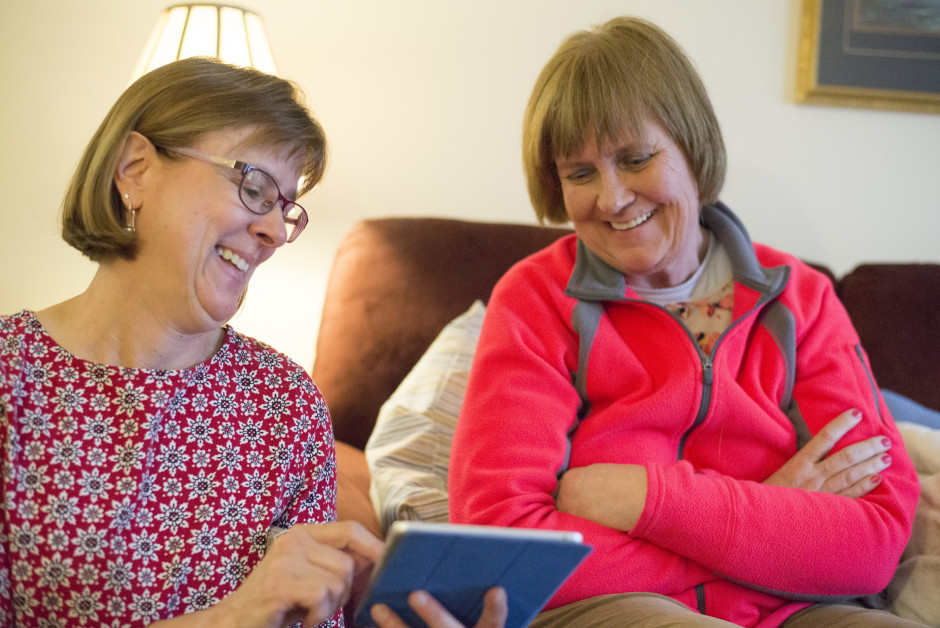 Lisa, left, and Cindy look at pictures from  an old friend who sent photos of her new home on April 14, 2015. 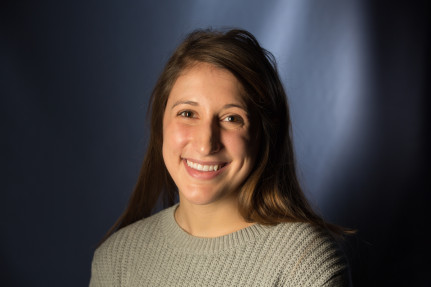 I want to shed a light on diseases, like Alzheimer’s and dementia, that are rampant in our community but rarely talked about.

Hannah is graduating from Penn State University with a degree in photojournalism.  Following graduation she is pursuing her own photography business and hoping to freelance in Baltimore, MD.