When the doctor, clad in a white coat, first told Randy and Amy that having children would be almost a miracle for them, they couldn’t make sense of the response.

After nine years of marriage, they had always factored children into their future lives. And now?

Desperate, the couple, who married in 1995, began investigating alternative methods. There was a possibility that in vitro fertilization could work, but at $15,000 per attempt and no guarantee of a successful pregnancy, Randy and Amy were hesitant.

“We thought, ‘Why go into debt for a possibility?'” said Randy, sitting in the basement of his ranch house in Centre Hall 12 years after he and Amy received the fateful news.

It didn’t take long for the couple to realize that they were both open to another option: fostering, and maybe if things worked out, adopting. They entered the foster care system, choosing to care for children under the age of five.

In unquestioning terms, employees in the foster system told the couple that their chance of adopting infants was slim to none. But Randy and Amy, with a come-what-will attitude, entered anyway — if they were meant to have children, it would happen, they figured.

On Mar. 30, 2004, the couple adopted their first child, Joey, barely three weeks old at the time. Since that date, Randy and Amy have fostered eight more children and adopted five of them.

And by all means, despite the somewhat unorthodox beginning, Amy, 43, and Randy, 47, their six children, two cats and dog are a conventional family.

“We had no intention of having six children,” Randy said. “I was content with none, a little more content with one, and happy with two. Now we’re extremely blessed with six.”

They bicker and tease each other, like when Randy complains that adopting the children ruined their blissful married life, but also share moments of love and intimacy, like when Amy pulls out the scrapbooks carefully laid out to detail each child’s life in photos.

It’s no secret to the children that they were adopted. Randy and Amy refuse to hide the basic facts from their kids — that in all cases, the birth mothers were neglectful, and sometimes outright abusive — believing that it’s part of the children’s identity.

“Everyone knows,” Amy said. “Like, you suddenly have a kid.”

When Randy begins recounting the story of how Sean ended up in their possession — his birth mother, the same as Joey’s, got into a physical altercation with her new husband, and Sean ended up with a brain injury — he’s sitting in the room, listening attentively.

Amy pulls her second-oldest aside and smooths back his hair. She holds back her hand, revealing a small scar flat across the top of her hand.

“See this scar?” she asks him.

Sean nods, and Amy continues: His head, like her scar, was not healing and as a result, he needed brain surgery. Though he’s fully recovered now, Randy and Amy were concerned and fearful for their second-oldest — just getting his diaper changed, he’d shiver like crazy, they said.

It’s not unusual for foster children to be adopted, but the majority return to their biological families, or some other relative. Of the 415,129 children in the foster system in 2014, 51 percent reunified with their parents or primary caretakers, compared to the 21 percent who were adopted by another family, according to the Adoption Care and Foster Care Reporting System. 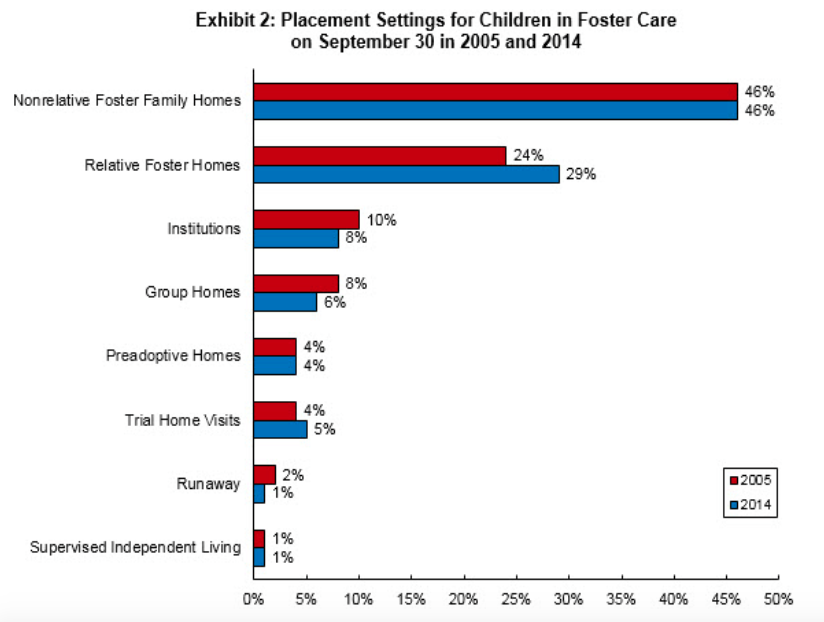 After Sean underwent his surgery, Randy and Amy decided to take a break from fostering children and focus on the two boys. The economy had begun to recess, and the parents wanted to give Joey and Sean a chance to just be theirs.

But, it wasn’t long afterwards for them to realize that they missed fostering children. Less than a year later, the couple took in three children — Bree, now 7, Heather, 6, and Dakota, 4.

On a relatively cool night in August, Randy and Amy got a reminder of how challenging fostering could be, of the time and commitment they needed to nurture relationships with each child, of the pain in seeing neglect in the flesh.

“None of the three children were potty-trained,” Randy said, “which was just crazy.”

But, the couple quickly adopted them into their mish-mashed family, entering them into the local school system and helping to train them. And less than a year later, Randy and Amy discovered that the birth mother was pregnant again — they’re currently nearing the finalization the adoption papers for James, who just turned 1.

Between Joey, 12-years-old and the eldest, and James, 1-year-old and the youngest, life can be hectic for Randy and Amy.

On an early May evening, Randy and Amy frantically rushed around their home while trying to ensure all kids were dressed and fed for a baseball game in Bellefonte that was beginning in less than an hour.

Dishes sat piled in the sink, to be ignored until there was time for someone to get to them. Shoes lay scattered around the house, accompanied by hastily thrown down sweatshirts and backpacks.

Though the eight-member family normally tries to eat together, sometimes there just isn’t enough time. Amy, red-chested and frazzled, threw together sandwiches at the last minute, smothering pieces of bread with peanut butter and jelly for each kid.

Amy and Randy go through the checklist before getting ready to leave. Did Joey put their dog, Tiki, in his cage? No. Does Sean have his cleats and his bat on him? No. Did Dakota fill up his water bottle yet? No.

“You are not ready to go,” Randy scolded, pausing angrily between each word for emphasis.

Randy has instilled his love for 80s music into his children, and when “Money for Nothing” by the Dire Straights comes up, he cranks the volume on and peers around a wall in the basement as the song reverberates throughout the house.

“Watch this,” he said, and when the kids hear the song, they come flying out of the playroom, dancing without inhibition, or embarrassment.

“Sometimes we’ll just crank it up and let them dance if we’ve been cooped up for a while,” Randy said with a grin.

But not everything is such a lighthearted give and take with the family. Randy and Amy are both unemployed, and with six children, it’s a burden and fear that constantly weighs on their mind.

And Randy, portly and slightly balding with a thin mustache that barely covers his upper lip, worries about his age — when the youngest, James, prepares to leave for college, Randy will be approaching his mid-60s.

“I was wrestling with Joey the other day,” he said. “And that just took it out of me.”

These are sad realities, and it’s something Randy and Amy say they’ll figure out along the way. They save where they can — there’s no need to pay for daycare or a nanny, they rarely take vacations as a family, and Randy is hunting for work in the area.

For now, they’re content with six children, but neither would adamantly rule out any future possibilities of additional adoptions.

They’d like to keep Joey as the eldest, and James as the youngest unless any of the birth mothers

“We have six kids and life is crazy,” Randy said. “But we wouldn’t change a thing.”